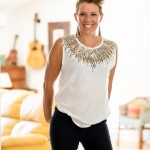 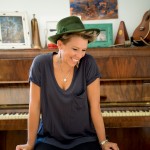 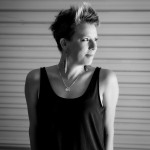 “The group’s charisma and strong dynamic crafted several invigorating numbers, including an eclectic mix of hits and new tracks. Synchronising acoustic, electric and bass strums, Toby relished in her music’s glorious glow. Vibrating the modest venue, the group’s hearty and boisterous set made for a positive aura. As the mosh pit steadily grew, Toby enlivened the audience with explosive guitar riffs and her enthusiastic presence. Toby herself is worth the price of admission and then some. Enthralling everyone from drunken larrikins to timid critics, the singer’s powerful vocals established her immense talents. Her enthusiastic stage moves and blood-sweat-and-tears approach created a flawless Saturday night vibe, particularly during tracks Last Night and Crash Landing.” (MUSIC MAGAZINE November 2014)

“This track (STOLE THEM AWAY) demonstrates Toby’s gift for storytelling, but how she manages to convey her narrative so well, is through her fantastic vocal delivery – she’s incredibly passionate and emotive in the way she tells her story, and it’s amplified by some fantastic country-rock driven guitar work”. Kane Sutton (DRUM MEDIA 2014)

“What sets Toby apart from other performers mining a similar vein is her infectious energy, a kind of worldly appreciation of life that makes even her most melancholy songs thrum with a kind of joyousness. It’s a key reason why her live performances are so acclaimed, and it’s translated well here. Toby has crafted a well-rounded release that encapsulates her sound while still being acoustically diverse. Opening track Again is rife with country twang, and closing number Good Old Days is a weird. off-kilter polka, somewhat reminiscent of an upbeat Tom Waits tune. In between, the album runs the gamut of moods and emotions, and although Toby is renowned as a singer/songwriter, the standout track is actually a cover: the stripped back, elegiac paean to lost love, Rather Go Blind. All up Sleeptalk is a fitting framework for Toby’s powerful vocals and emotionally raw song writing, and will find it ticks all the right boxes. (X-press Magazine January 2011)

“It’s a gifted singer-songwriter who is daring enough to remain this raw. It’s the same reason why Toby’s audience has found such a home in her music”

“Local singer, songwriter and guitarist Toby prides herself on giving a killer live performance but to date, she had yet to capture that rollicking passion, exuberance and sheer joy on album. Like her last album, this one does stand on its own, particularly songs such as Karma, All I Need and Tu Es Belle. What’s most obvious is how comfortable Toby seems laying open her emotions. It’s brave and sexy as she mines a mix of folk, pop, roots and reggae.”

“Toby has undoubtedly one of Perth’s most powerful voices… Toby whos voice seems to know no bounds fronts the one part orchestra, one part bonfire jam, one part circus with eaze…Just how does Toby arrive at such a swirl of delectable musical chaos on stage?”

“Love Underground is my first introduction to Toby and may be the beginning of a beautiful relationship. Vocalist Toby Beard has a naturally soulful and earthy voice, sounding full and mature, belying her young age. The overall feel is joyous, free and soulful, making good use of the harmonica and horns. Very highly reccommended!”

“Her confidence has grown and her determination has flourished, her ego has been kept in check”

“It was a love at first sound when the audience was introduced to Toby Beard during her second of two high-energy performances during The Big Time Out. ( Cumberland , BC , Canada )… While none of my favourite performers were the headliners during The Big Time Out, don’t be surprised that you might hear from the likes of Toby or Mother Mother making it in the competitive musical industry in the future.

If they do, you can say you saw them on The Big Time Out stage.”

……..”Toby Beard is a superb singer/ songwriter and guitarist who not only plays and sings well, but has a fine flair for drawing in an audience and keeping them entertained and delighted with her songs and inviting spirit…….She’s a gas!” Victor DeLorenzo (VIOLENT FEMMES)

“Toby have constructed a mish-mash of everything from Caribbean sway, to third world samba, however subtly. Lyrically Toby Beard is at her best on Renaissance, often backing up these strange musical tangents with contradictory (or at least unlikely) poetry. In so far as telling a tale, Beard is certainly a bit of a gun. Reflecting on some of her travelling experience, and the colourful places snd people she observed, Beard put pen to paper in a respectful and most descriptive manner. Without using overly words/rhymes, though nicely avoiding being unnecessarily abstract, Beard paints vivid pictures that show strong signs of a storyteller heart. Warmly produced, and varied enough for even the shortest of attention spans, Renaissance is great studio record from a band best known for their live shows”.